The Government of Lao PDR and the United Nations hosted the 12th High Level Round Table Meeting on the 27th November 2015 at the International Cooperation and Training Centre (ICTC) in Vientiane.

Over 300 delegates from the Government and development partners from the UN, donor governments, non-profit organisations, national non-profit associations and the private sector attended, and a range of representatives endorsed the ‘Vientiane Partnership Declaration.’

His Excellency, Prime Minister Mr. Thongsing Thammavong, opened the meeting that had the theme of “Enhanced Partnership for the Effective Implementation of the 8th National Socio-Economic Development Plan – Achieving the Least Developed Country graduation criteria by 2020.”

“Lao PDR has made considerable efforts to reduce poverty. We’ve laid strong foundations to graduate from Least Developed Country status by 2020. In the years to come, we’ll focus all our efforts on the implementation of the 8th five-year National Socio-Economic Development Plan to 2020. We’ll determine clear measures, in a clear action plan, to achieve development in the economic, socio-cultural and environmental spheres.”

“I wish to reaffirm that the Government is a reliable partner in managing the implementation of Official Development Assistance in an effective, transparent way, that helps bring about sustainable development, and of course reaches the people – who are the real beneficiaries.”

“I’m delighted to see that the Sustainable Development Goals are being included in Lao PDR’s 8th National Socio-Economic Development Plan. The 17 global goals aim to tackle problems that affect us all; poverty, inequality and injustice and climate change by 2030.”

“These goals are part of the broadest, most ambitious agenda for people, planet and prosperity in history, and that is exactly why partnerships are so important. Without new partnerships, new sources of funds and new technology, we won’t meet these vital targets. In this way, the implementation of the Vientiane Partnership Declaration will be key for Lao PDR.” 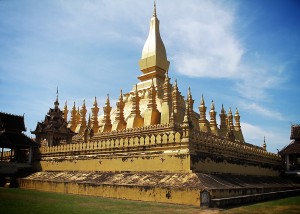 The The Vientiane Partnership Declaration was launched at the 12th High Level Round Table Meeting. The Declaration updates an existing document from 2005, expanding the concept of ‘aid effectiveness’ to ‘effective development co-operation,’ which places a greater emphasis on new sources of development finance alongside Official Development Assistance. 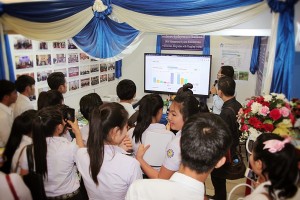 The Exhibition on Development Cooperation  was officially opened by Somdy Douangdy, Minister of Planning and Investment and Haoliang Xu, UN Assistant Secretary-General, UNDP Assistant Administrator and Regional Director for Asia and the Pacific,  on 26th November, 2015.  The exhibition highlights the achievements of the 10 Government-led Sector Working Groups and other agencies.

Ministry of Planning and Investment: