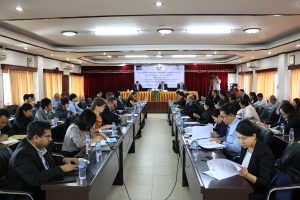 The Ministry of Planning and Investment chairs the Macroeconomic Sector Working Group. The Asian Development Bank and the World
Bank are Co-Chairs.

The moderating economic activity derailed the fiscal consolidation in 2016; prompting a stronger response in 2017. The fiscal deficit in FY15/16 widened to 6.2 percent of GDP as revenues plummeted. The authorities have since introduced measures to support revenues and control spending; however, the deficit is expected to remain elevated. Public debt is estimated to have further increased to almost 67 percent of GDP by mid-2017. This stresses the importance to stay on the course of the fiscal consolidation plan adopted by the National Assembly in late-2016 and strengthen public debt management.

Monetary conditions remain unchanged, the exchange rate has been more flexible in 2017 while parts of the financial sector continue to be exposed to significant risks. There were no major changes to the monetary policy instruments as inflation pressures remain low and growth rate of credit stabilized around 15 percent yoy in real terms. Greater flexibility in the exchange rate during 2017 helped reverse some of the appreciation in recent years and may lower pressures on foreign reserves. using the full flexibility of the +/- 5 percent band can help balance the exchange rate stability objective with competitiveness concerns. Parts of the financial sector remain undercapitalized while the quality of the loan portfolio deteriorated slightly. The ongoing restructuring of two state-owned banks and the revamping of the legal and regulatory framework for the sector should help lower risks.