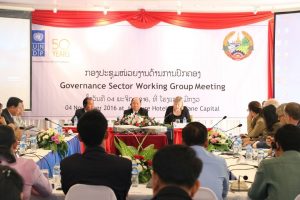 November 4th, 2016 –In preparation for the 2016 High-Level Round Table implementation Meeting (RTiM), Government ministries, Development Partners and Civil Society Organizations came together to take stock of key achievements and challenges in the governance sector, to discuss national priorities moving forward in the area of public administration reform and enhancing access to justice and rule of law and to agree on key messages from the GSWG to be shared at the RTiM.